Close to 40 events are on tap for the third annual Reno Craft Beer Week, June 2-10, as the region recognizes and celebrates our growing craft beer culture.

The events show the collaboration, education, and dedication among the members of the region’s craft beer community; currently 18 brewers strong. Patrons will get to sample our area’s finest beers and learn from local beer makers about their evolving craft, which dates back to 3000 BC where we find the first written mention of the beverage in the Sumerians’ famous poems to Ninkasi, the goddess of brewing.

This year’s Reno Craft Beer Week is again kicked off by Backwash, a celebration of the art and craft of home brewing in support of Environmental Traveling Companions on Friday, June 2, at the Renaissance Reno/Bundox Bocce.

Closing ceremonies will be held on Saturday, June 10 in Sparks’ Victorian Square with the second CollaBREWation Festival presented by the Nevada Craft Brewers Association and featuring more than a dozen collaborative beer expressions from our local brewers.

A schedule of events will also be published in the June 1 Reno News and Review and events will be regularly featured on the Reno Craft Beer Week Facebook page. 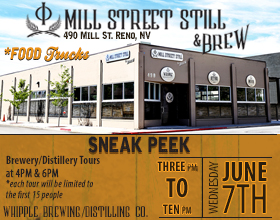